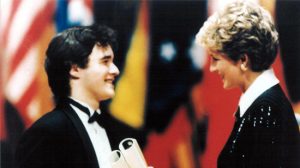 Eugene Mursky was born in Tashkent, the capitol of Uzbekistan in the former USSR. He received his first piano instructions when he was six years old at a youth music school. Two years later, he was admitted to the class of the famous piano pedagogue, Tamar Popovich, at an institute for highly talented children. At the age of twelve, Mursky made his first trip to Moscow to study with Professor Lev Naumov. The following year, at age 13, he achieved his first major success in Tashkent, performing Chopin’s Second Piano Concerto as a soloist with the Uzbekistan State Sympohony Orchestra. In 1989 Mursky was awarded the First Prize at the Piano Competition of Uzbekistan. In 1990, he won the “Grand Prix” at the fifth Frunze International Piano Competition.

In 1993 Eugene Mursky left Tashkent to pursue his advanced studies with Reinhard Becker at the State College of Music in Trossingen, Germany. During this period, he received numerous awards including the scholarship of the German Academic Exchange Service (DAAD) as well as an award from Kunstiftung Baden-Wurttemberg. In 1994, the high point in Mursky’s artistic career came when he was awarded First Prize in the World Piano Competition of London under the auspices of Princess Diana. In addition to the first prize, Mursky was awarded a special prize for the best interpretation of Chopin. After this great accomplishment he was invited to perform at important venues in Great Britain, Germany, Ireland, Japan and the USA, as a soloist with world renown orchestras such as the London Symphony Orchestra, the Irish National Symphony Orchestra, the Royal Swedish Philharmonic Orchestra and the Singapore Symphony Orchestra. In 1997 and 1998, Eugene Mursky continued his studies with Professor Einar Steen-Nokleberg at the State College of Music in Hannover, Germany. He then graduated with honors with his advanced degree (Ph.D. Music equivalent) in Solo Performance.

In the following years he won First Prize at several competitions: the “Concours Grieg 2000” in Oslo, the Bremen International Piano Competition 2001 and “.Denza” International Piano Competition in Naples 2002. From 1998 to 2003, Eugene Mursky studied in Salzburg and received the “Mozarteum Award.” There he intensified and enlarged his repertoire with his teacher, Professor Hans Leygraf.

He has been commissioned by Hänssler (PROFIL / Edition Günter Hänssler) label to record the complete works of Chopin in commemoration of Frederic Chopin’s 200th birthday.

Already published and highly acclaimed are

from the Edition. Other CD recordings are

by Hänssler Classics as well as